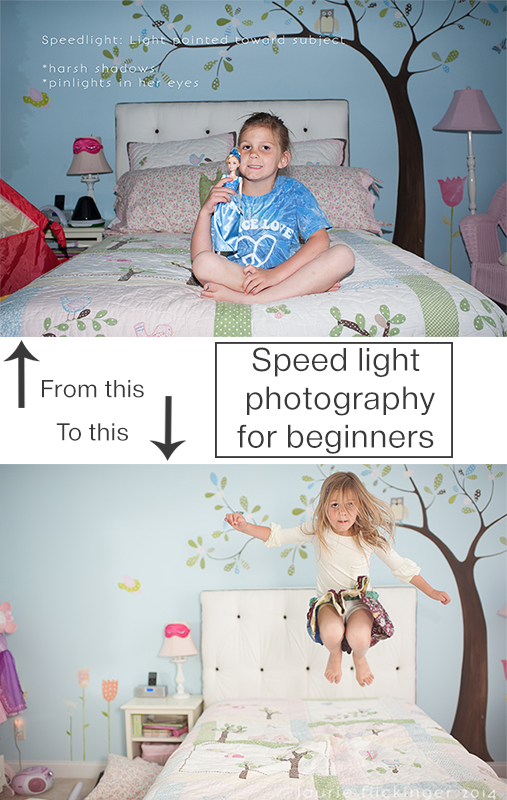 When I named this article “Speed Light Photography for Beginners” what I really mean is, I got my flash less than a week ago and I’m going to show you what I’ve learned so far. If you have been using your flash for more than a week, just go ahead and stop reading. I’m kidding. Hopefully, my research will be fruitful for all beginners. But if you’ve been shooting with it for a while, I hope I don’t completely waste your time.

I have been shooting in natural light for years now. To be honest, using a flash is a bit intimidating to me. I feel like I’ve got my brain wrapped around shooting in all types of natural light and with using constant nontraditional light (like iPads, flashlights, lamps, etc) but a flash?  I feel lost and confused! So, what is the first thing I did when I got my new Nikon SB-700 Speedlight for Mother’s Day? Well, I let it sit in the box intimidating me for a few days….then I skipped reading the instruction booklet and finally just took it out and played.

I have shot in natural light for so long for a reason. I love the look of natural light. I love the way it wraps around a subject. I love how it can range from soft to hard and dramatic. I love how it can be manipulated in so many ways to get the look that you want. Flash can be used in many ways as well and can give you more freedom in the evening hours or indoor areas where you are lacking natural light. This is what I’m hoping to gain from using flash, but I also want my flash to give me “natural looking” light. So, in this short and sweet tutorial, I’m going to show a few different images and point out what looks “flashy” and what looks more “natural” to me. I hope that these images will be a guide for you to critique your own images as you learn to use your flash.

100% Natural light image
First off, here is a 100% natural light image. The light is coming from a set of big windows camera right. All of the shutters are opened to let in ample light. It is an overcast day, so the light is soft. Because the light is coming from only one direction, it is directional light. The light is perpendicular to the subject, which creates a split lighting scenario. Notice how half of her face is lit, the other half is in shadow. There is a mirror over a dresser camera left, which bounces a bit of light back into the shadows camera left (my little girl’s right). And her arms are much more tan than her legs. Looks like we need more time at the pool! 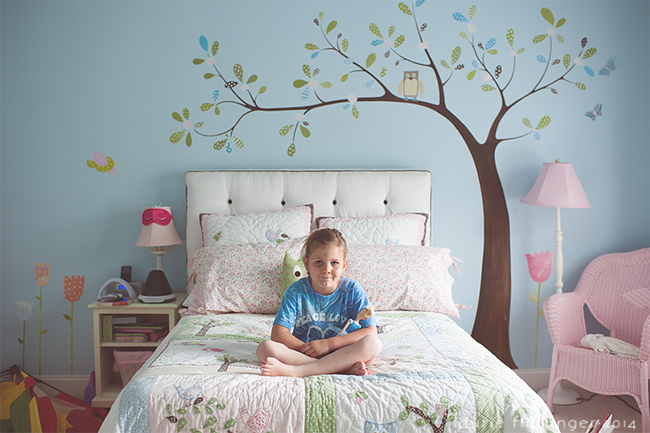 Speed light pointed straight at subject
This is an extreme example of the look I’m not going for (and the look that any seasoned Speedlight user isn’t looking for in their images either). This is the speed light on and pointed straight at the subject. Basically, it’s being used as an expensive pop up flash. Subject is in the same location on the bed. In this image I closed the shutters on the windows, so the room was very dark. There was little ambient light coming through the closed shutters. Notice the differences in the shadows in the images. This would be considered “hard” light. It is coming from a small light source. The shadows are harsh and have very defined lines. There are even shadows projected onto the wall camera left that are from a boa hanging from her dresser mirror. I can’t think of any positives in this image. 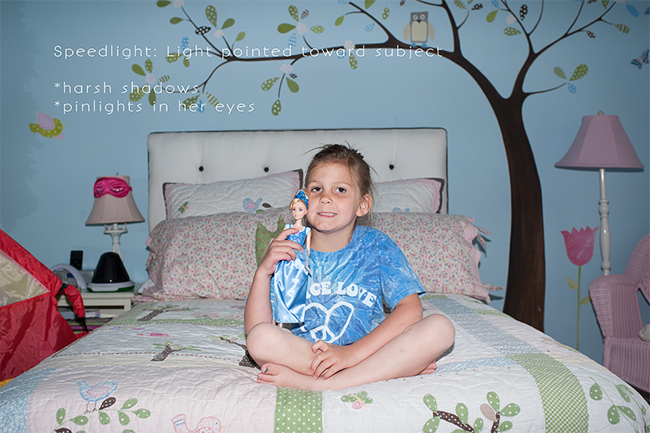 No flash and blinds closed
An example of what the lighting actually looked like to the eye with out flash and with the shutters closed. Without the flash, I would not have been able to get my shutter speed up to a point where I could freeze my subject mid jump in the air. The results would have been grainy and blurry, as the day was overcast and there was less light because it was later in the evening. While for any other day, I would not have even attempted these images in this type of lighting situation, I would have waited for a bright, sunny day, and opened up the shutters to let tons of light in. Since, I was trying out a new toy, I think this situation was perfect. 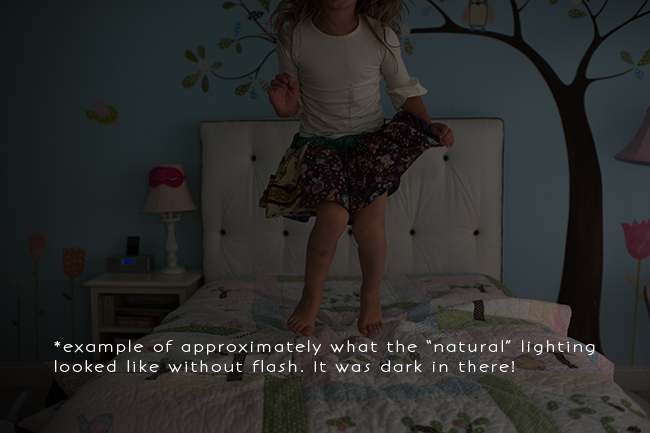 Bounced light examples
Here are some “bounced” light examples. In the following images, I played around with bouncing the light from the speed light off of the closed white shutters camera right. I was “attempting” to bounce the light so that it could look more natural. I played with different angles…turning the flash from 90 degrees to 45 degrees, and then changing how much the light was pointed up or down so that I could look at each result. Let’s analyze a few of these images and think about what works and what doesn’t work.

This image looks very “flashy” to me. The flash was bounced off of the shutters/wall camera right but there is also too much light coming from straight in front of her. I like the look of the shadows that are cast from the lamp and bed. I like the light fall off from camera right to camera left. Notice how the wall gets darker as you move from camera right to left. That is much like the natural lighting scenario in the first image of this article. On the flip side, the shadows of her body on the wall and headboard are bad, bad, bad. So, I kept trying other angles. 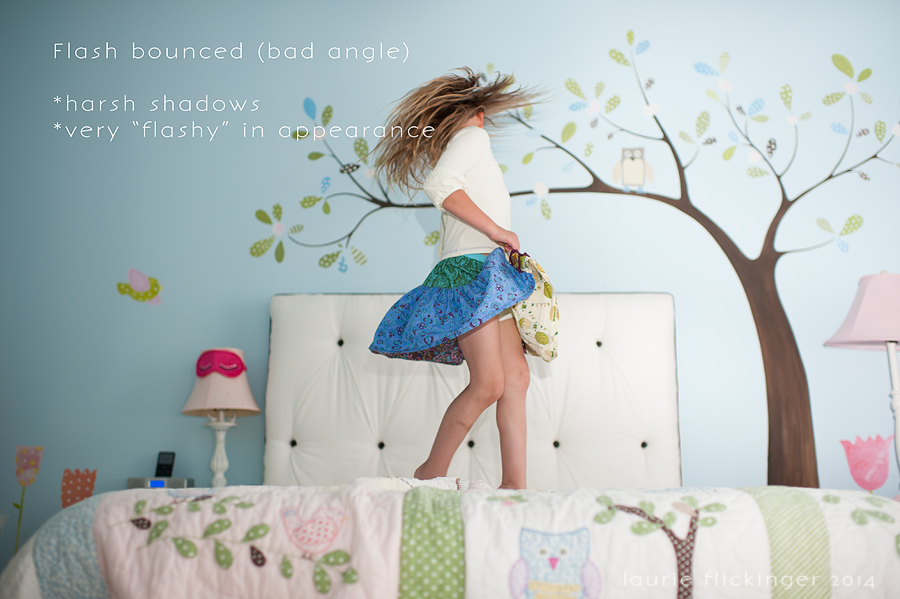 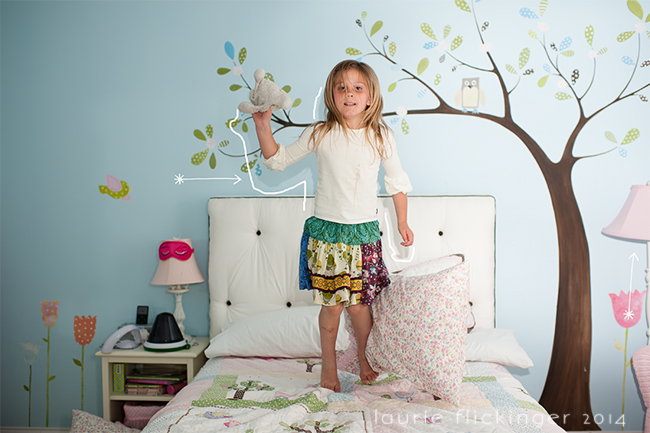 This image looks a little more natural to me. The lighting is pretty flat and even, but the shadows are softer behind her. I think the speed light was pointed at a 90 degree angle toward the window. The amount of light still coming from the flash in front of her makes for a more even lighting situation, as well as the light then bounced from the shutter to the mirror camera left. Notice the shadows of the lamp in this image are placed camera right from the light bounced from the mirror (bounced from the window). How confusing does that sound? Light does a lot of bouncing around. So all types of reflectors should be accounted for in natural lighting and even more so in flash lighting, I’m finding, because the lighting is much more intense. I also noticed that the farther away my subject was from the background, the less noticeable the shadows are on the background. 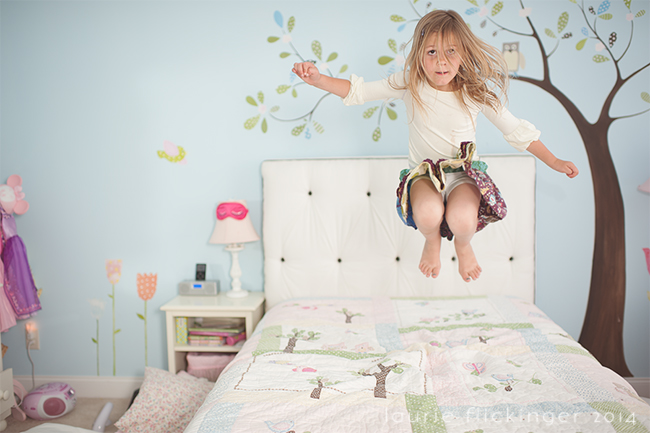 This is what happens when you tell your kid she has permission to jump on the bed……she was exhausted! Here are a couple that are passable (for me). The lighting looks much more natural to me. The way the shadows fall look more natural. The lighting is more directional (which I love) and less even (like the image above).  The shadow of the lamp camera right is a dead giveaway though. 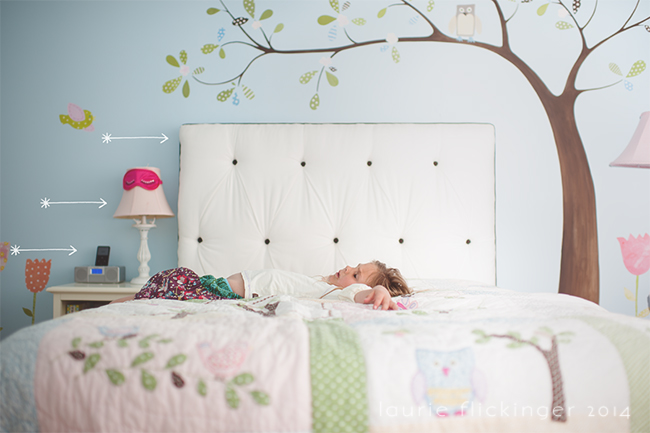 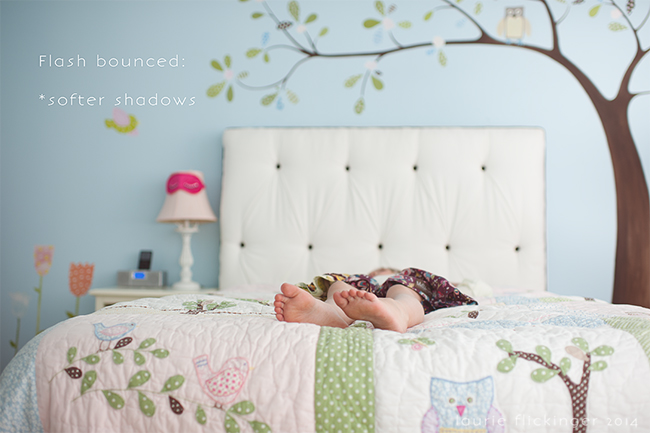 I haven’t talked at all about how I got my settings. As soon as I put the flash on and realized that “L” means “lock”—I should have read the manual. I turned the flash over to manual. I know that the flash syncs as 1/250 sec and greater, so I made sure my settings reflected that. Then I played with the amount of light the flash was putting off from 1/1 (way too bright) to 1/128 (not enough light). It was trial and error. As I learn more, I hope to write more articles about flash! I’m excited to start this journey and I hope by trial and error I can help others who are new to speedlights too!

Do you have a speed light? What have you learned? Tell us in the comments below.