Home » Manual Mode » How to Meter Using the Sky

How to Meter Using the Sky
Manual Mode 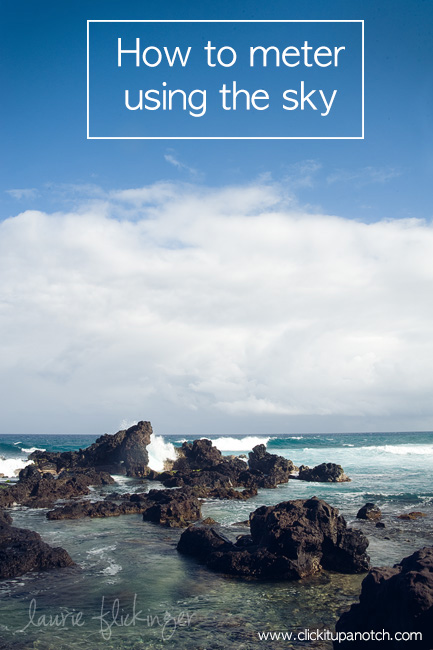 When I began learning about photography, portraiture was just about the only type of photography on the brain. I wanted to take better pictures of my kids, so when I learned about metering, I learned to meter off of skin because in portraiture getting the correct exposure for skin is the most important.  But, when taking photographs of landscapes and macro, there isn’t skin to meter from. So, how do you go about metering when you typically don’t meter off of a gray card or skin?

Recently, my husband and I took a vacation to Maui, Hawaii where I took a BUNCH of pictures, and very few of them had people in them. I’m not typically a landscape shooter, but in Hawaii, there are way too many beautiful scenes not to attempt it. I found myself having to meter using the sky a lot of the time, especially on the really sunny days. 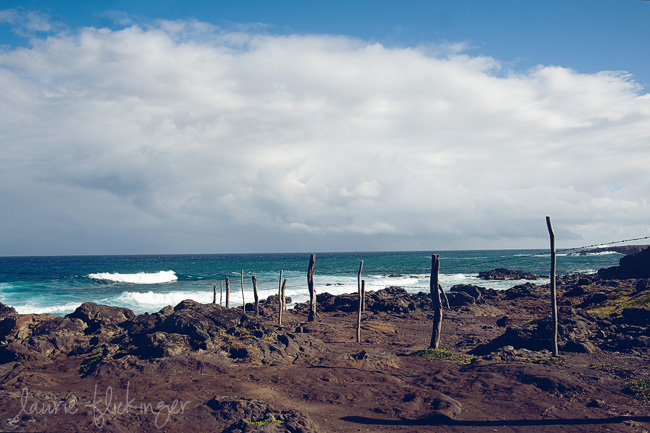 In full sun, the deep bright blue sky is a great place to meter for a jumping off point. When using the Zone System, the bright blue sky is considered the same tone as neutral gray. For example, pretend you were seeing the sky in B&W, the blue of the sky would be neutral gray if converted. So, I would meter the sky, set it to zero, take  a test picture and look my histogram.  Check out Reading a Histogram by Courtney to learn more about how to read a histogram. Learning to trust your histogram is essential to getting good exposure every time.  After taking a peek at the histogram, I then decided whether or not to underexpose or overexpose the image or leave the meter at zero.

Here is an example of what I think of as a “bright blue sky” and of which I started off with metering at zero, and then made minor adjustments after taking a look at the histogram. Training your eye to see “neutral gray” in colors will give you a great place to start when metering off of subjects that don’t have skin. There is some lens vignetting in this image, which I liked and didn’t correct in ACR, but the center of the image is closer to what the eye saw on that day. 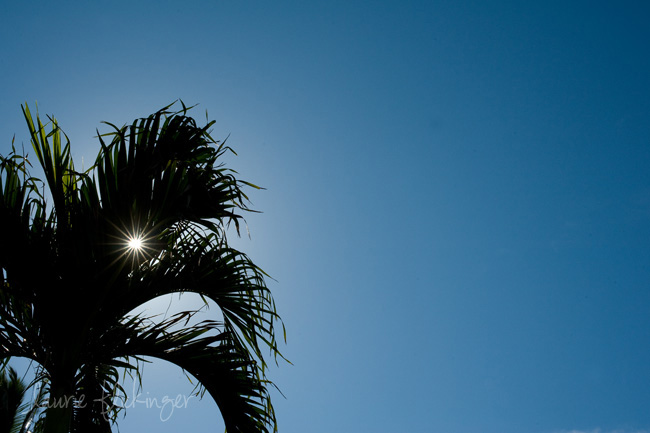 You can also use the sky to meter for sunsets. In the following images, there is a bit of blue sky (much to the left of the sunset), clouds, dark waters, a lot of light reflecting off of the water. Again, I metered off of the blue sky, then adjusted accordingly by taking a look at my meter and LCD. By checking the histogram, I could be sure that was I thought was most important in the image was exposed correctly. For me, I wanted the yellows to pop the most. I slightly underexposed to allow the colors to be more saturated, then brightened as I wished in post processing.  As the sun was closer to setting, I was constantly changing my settings. But, since I already had a good measurement, I knew that I only needed to keep overexposing by 1/3 of a stop or so every few minutes. 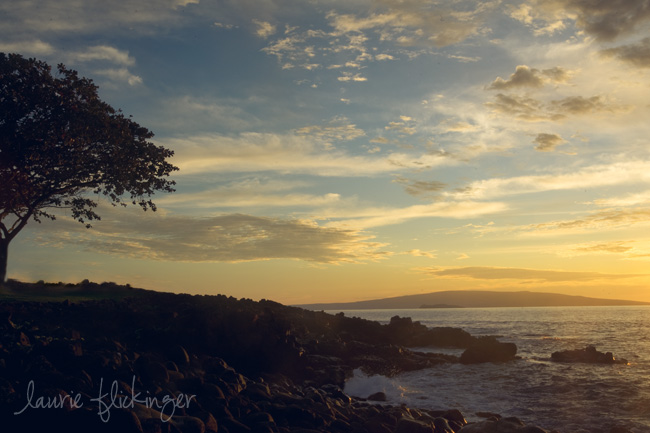 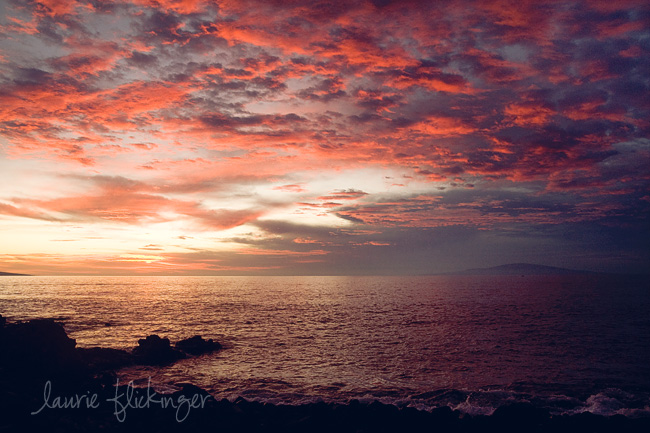 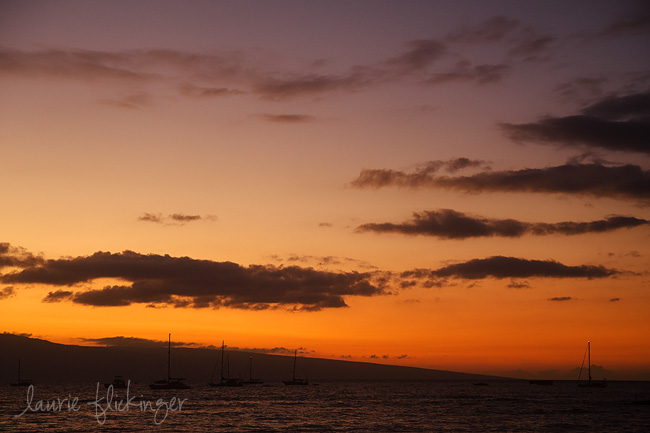 One more example!
Here are a couple of pictures that I took just for this post to further demonstrate what I mean by metering off of the sky. This is not the lighting I would choose for this pretty daffodil, but for the purpose of this post, it works. I pretty much always spot meter. I’m usually taking pictures of my kids so spot metering works for me. Because I know it better than the other modes, I use it almost exclusively. So, for these images, I spot metered the big blue sky, then set my meter to zero and took the picture of the tree. For the tree, the exposure looks pretty good. Next up, I thought I would take a picture of this daffodil to show how I would adjust my meter. It is located about 15 feet from this tree at the same angle from the sun and sky from which I metered originally. I took the picture of the daffodil, then took a quick look at the histogram. I could tell that the yellow was blown because the histogram was climbing the wall a bit and the lightest color in the image is the yellow. I readjusted the meter to underexpose by 2/3 of a stop (two ticks to the right for Nikon and 2 ticks to the left for Canon users). And bingo, the histogram moved in the direction that I wanted and exposure is right where I want it. 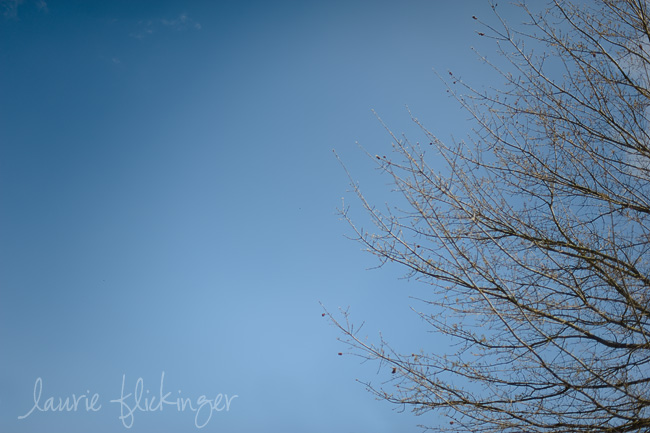 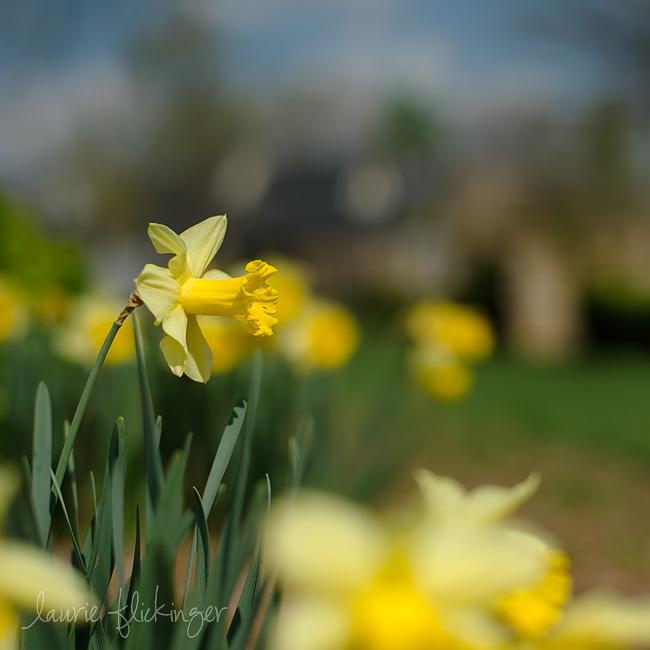 I hope this gives an idea that there are many different ways to meter depending on your subject. I’ll be writing another post at some point this year about the “Zone System” and how helpful it can be when metering for landscapes. Thanks for reading!