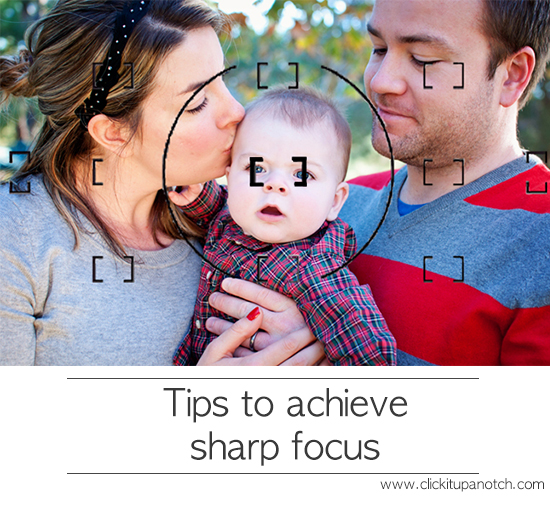 When Courtney first asked me to write a guest post for “Click it up a Notch” I was really excited and honored!  That feeling quickly turned into a giant writers block as I wondered what I could possibly share with so many talented photographers!

But there’s one thing I always come back to when picking out my favorite photos and that’s tack sharp focus.  Photoshop can do a lot of amazing things.  It can fix up photos with the worst exposure you’ve ever seen, remove unwanted elements, straighten bad horizon lines, and do a thousand more handy tricks.  But it cannot take a photo that is out of focus, and make it be in focus. For that reason, I’ve always felt that focus is the most important element to get right in camera.

I am by no means an expert on the subject, but I’ve learned a few tips that I can share.

The most helpful method I’ve discovered is Single Point AF, verses Dynamic Area or Auto Area. (These are the focus options for my Nikon D90—they may be called something different on a Canon, or vary by camera.)  In Single Point AF you can move the focus point to the exact part of the photo you want to have the sharpest focus while looking through the viewfinder.

I learned photography with the “focus and recompose” method. My camera focused on whatever was in the center of frame, so if I wanted a flower to be in focus on the far right of frame, I’d have push the shutter half way to focus on the flower and then recompose the shot to get the flower where I want before taking the picture.

The problem with this method is movement, especially when shooting at wide apertures with shallow depths of field.  I found that it was really easy to throw off my focus completely by my small movements and that I risked that outside elements, like wind, could come and move my flower in the time it took me to recompose my shot. With Single Point focus, I can compose the shot how I’d like, and move my focus point to that flower on the right of frame, focus, and complete the shot without having to move.

This method has been incredibly helpful to me. (It is my understanding that this only works for Nikon shooters as we have an active focal point.  Canon people you still need to meter off the center focal point and then either move your focal point or focus and recompose.  Maybe a Canon person can chime in **Check out Melissa’s comments below if you are a Canon user to clear up any confusion** – added by Courtney)

For example, in the shot below, I wanted the sharpest focus to lay on the baby’s face. Since he was in the center of the photo, it was fine leaving my focus point right in the center. I made sure the focal point I selected landed right on his eyes. 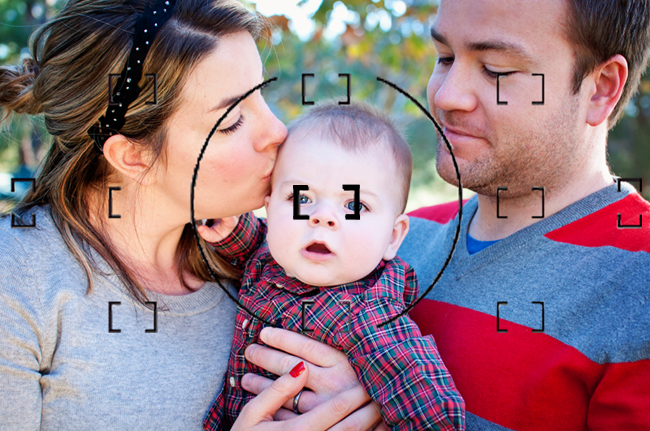 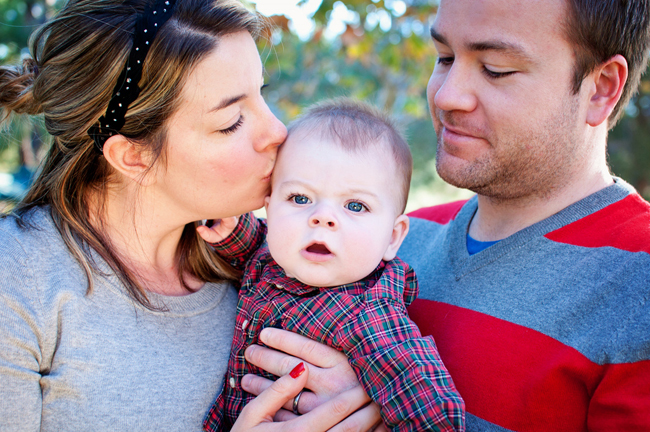 But some shots aren’t so easy and you don’t want your focus to lie in the center of the frame. In the shot below, I was shooting vertically and her eyes were in the top 1/3 of the photo.  I wanted my sharpest point of focus to be on her eyes. So when I turned my camera and looked at her through the viewfinder, I simply moved my focal point towards the top of the frame and centered it right on top of the eye closest to me.

When shooting people you always want their eyes to be tack sharp, and if they’re at an angle, I always want the eye closest to me to be the sharpest part of the photo and so I always place my single point of focus directly on the closest eye. If I had left my focal point in the middle, I would’ve had to tilt my camera up to focus on her eye and then move my camera back down to frame the shot and take the picture. During that time I would risk the possibility of either her or me leaning forward or back just enough to throw focus off completely, and the picture would be lost. No amount of sharpening in Photoshop would make the photo be in focus.

I should also mention that I know a lot of photographers that still use and love the “focus and recompose” method and that Single Point AF is just something that works for me and that I think is worth trying out!

Two other important factors for sharp photos are ISO and Shutter Speed.

Shutter Speed is fairly self-explanatory. The faster the shutter speed, the lower the risk of movement affecting your photos. I used to pride myself on being able to take photos in focus as slow as 1/40 of a second. But the more I shoot, and the pickier I get about focus, the faster I prefer my shutter speed to be. When shooting people, I really prefer to be around 1/125 of a second or faster—and even faster for kids if possible!

Your ISO, as you probably know, can affect grain in your photos.  As a general rule, the higher your ISO, the more grain that will be introduced. And grain can detract from that sharp look in your photos.  But grain tends to mostly appear in the underexposed parts of your pictures.  So while you should start off at the lowest ISO you have, don’t be afraid to bump it up a little to get a proper exposure, if necessary. There will be LESS grain in a properly exposed photo at ISO 400 than there will be in an underexposed photo at ISO 200.  So if it’s getting dark, it’s not always the best idea to keep your ISO down and just shoot dark pictures, figuring you can fix it in post. Getting proper exposure in camera can keep your pictures looking sharp!

Ok, so you may have already known that your focal methods, shutter speed, and ISO, can affect your sharp focus. But did you know your Aperture can affect sharpness in your photos as well? And I’m not talking about depth of field. I’ve heard for a long time that every lens has a “sweet spot,” or an aperture where the lens shoots at its sharpest, and I recently decided to put this to the test.

I set my camera up on a tripod and aimed it a page in a book, using a Nikon 50mm 1.8 lens. I took a photo at several different apertures and then blew up the pictures on my computer to see the differences. The results blew me away! 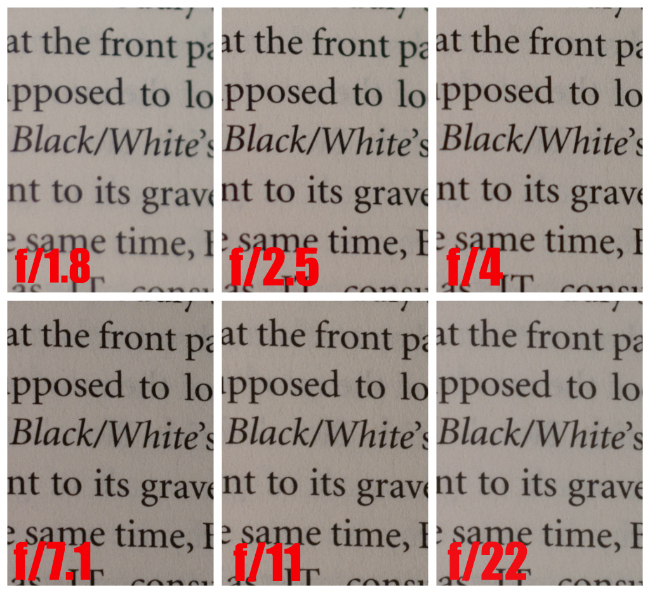 The mid-range apertures all look pretty similar, but to me, my sharpest photos are at f/2.5 and f/7.1. The amount of degradation in the photo at f/1.8 shocked me!  I may never shoot at 1.8 again! In the past, I’ve taken landscape shots on tripods all the way at f/22. After seeing the results of this test, I now see I’d be much better off staying around f/7.1 to get the sharpest results possible.

These results may vary by lens. The only way to know the sharpest aperture of your lens is to give this test a try! I highly recommend it!

My last step in making sure my final photos are tack sharp is done on the computer when I’m reviewing my shots from a shoot. When shooting portraits, I go through my photos on Lightroom and zoom in all the way on every single photo and check the focus around the eyes. If the focus isn’t sharp, I won’t edit the photo or pass it on.  In the photos below, I had two really cute shots of this adorable baby.

At first glance they may look similar, but when I zoomed in on his eyes I saw that the focus was a little off on the photo on the right. Therefore, this photo was not passed on. 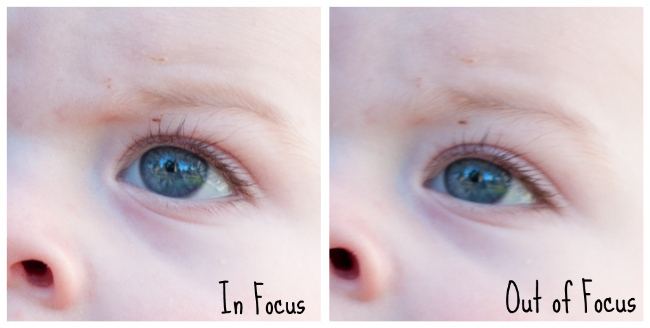 This method can be disheartening at times, because sometimes I really love a photo and I am crushed to see the focus is off, but by doing so all the final photos in my portfolio are crisp and clear and I hope that their sharpness makes them stand out! 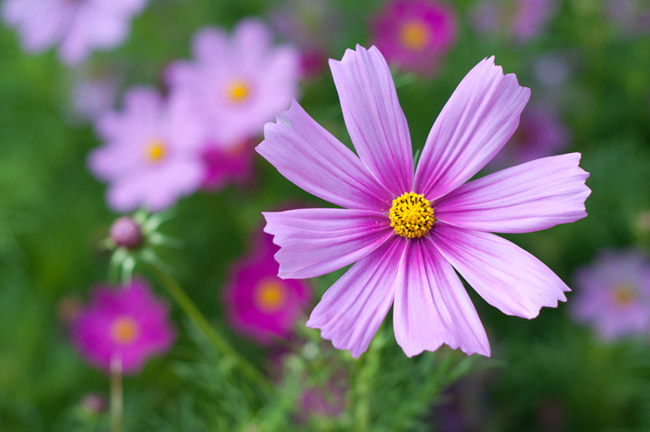 About the Author: Jaymi McClusky
My name is Jaymi and I blog over at Live, Love, Travel where I share many photography tips and host a weekly link-up called “Tuesday Tips & Pics.” You can also follow me on Facebook, Flickr, or even on Pinterest.

I hope to see you soon!