with Courtney Slazinik
Menu
Everything You Want to Know About Camera Lenses: Part 1-Understanding the Writing on the Lens
Gear 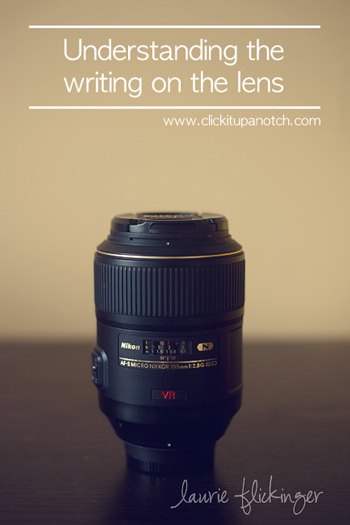 When my love for photography first began, shopping for a new lens was somewhat intimidating. There were so many numbers! I had no idea how to decipher it all.  So, today’s post will dig a little deeper into lens jargon. You’ll probably learn more than you care to know about everything written on the exterior of a lens. Keep in mind when reading that some manufacturers include more information than others, and even some series of lenses within the same manufacturer may have more or less information. 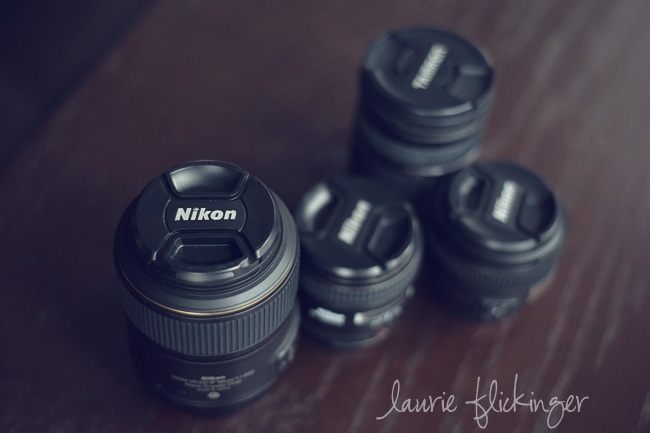 When looking at a lens, everything short of reviews can be written on the exterior. It’s usually a mouthful! Let’s start with a lens by Nikon and break it down to determine what all of it means. Then we will move on to other specifics. Meet one of my favorite lenses, the Nikon AF-S Micro Nikkor 105mm 1:2.8 G ED. This is from the newest series of lenses from Nikon, the G series. This lens includes a lot of information just in the name of the lens. 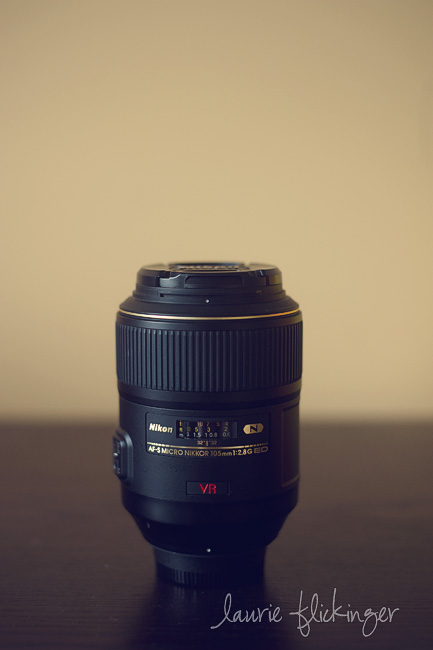 Nikon is the brand name. There are many of lenses available to fit your camera body. However, “first party” lenses will only work on camera bodies of their own brand. For example, Nikon and Canon are first party lenses. There are other companies that make lenses with different mounts that will fit many camera brands and models. Lenses that are not the same brand as your camera are called “third party” lenses. A few popular third party brands include Tamron, Tokina, and Sigma.

Motor in the Lens

AF-S  is the newest version of the lenses in the Nikon family. AF-S mean AF (autofocus), S (Silent Wave Motor). This means that the lens has a motor built inside that focuses the lens. Some consumer grade cameras by Nikon require an AF-S lens to autofocus on the camera body. Canon lenses have always had motors in the lenses.

Micro is the second hint as to what this lens can be used for. Not all lenses describe exactly what they do in their name, in fact, most do not, but by the end of our four part series, you’ll be able to determine for yourself what you might use any lens you come across for. The Nikon 105mm f/2.8 is a micro or macro lens. You’ll learn more about the specifics of each type of lens in Part 5 of our Lens Series by Kelly Garvey.

used in the lens can be written on the exterior of the lens. In this case, the letters ED mean “Extra Low Dispersion”. These terms will all be different depending upon the manufacturer and will not be written on every lens. Just remember that the numbers and symbols on the lens really mean something. They aren’t just there to make it look fancy! Canon uses the letter “L” in its lenses to distinguish its “Extra Low Dispersion” glass lenses. The L series of Canon lenses also has the distinguishable red ring around the lens.

The null sign on the lens next to a number will tell you the screw on filter size for your lens. This image shows a null 58, which means this Nikon 85mm f/1.8D AF lens would need a 58mm filter. 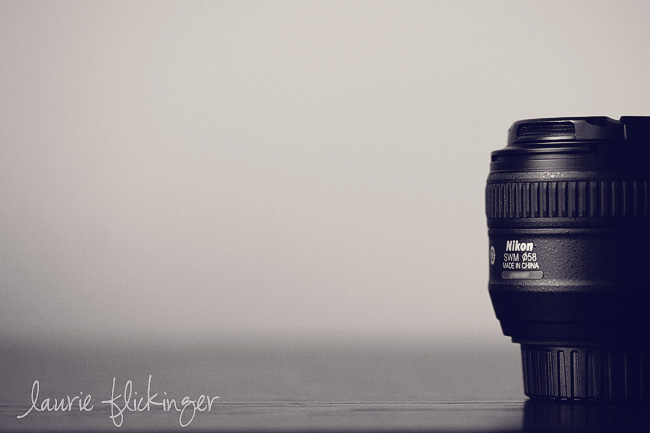 Are you snoozing yet???? Sanford is! 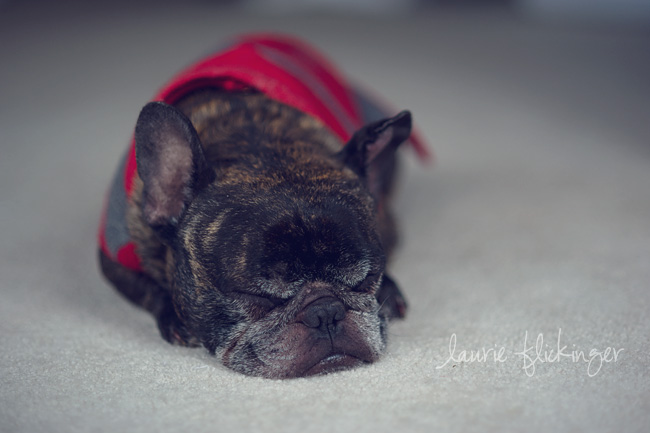 A number followed by “mm” refers to the focal length of the lens. The focal length in combination with the aperture will most likely be the most important information to know when looking for lenses. When looking at a prime lens, like the Nikon 105mm 2.8, there is only one focal length, 105mm. Zooms have a range. For example, my Tamron AF 28-75mm f/2.8 can zoom between 28mm and 78mm.

Wake UP! We are almost finished, I promise! 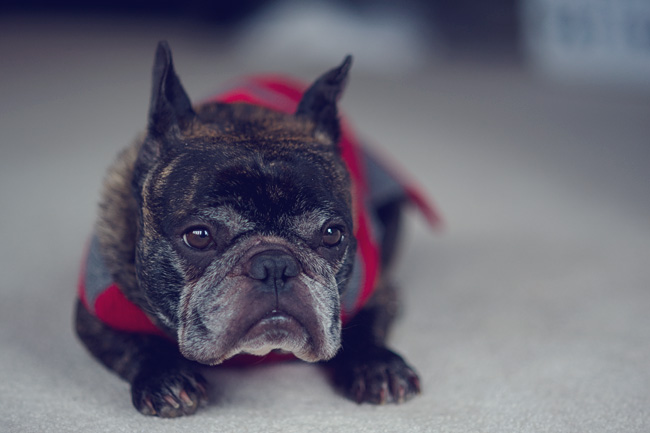 There is even more information on your lens that may not need to know in order to rock your camera, but, it is there for a reason and can be useful.

This is a feature found on Canon lenses. This scale is used when shooting monochrome infrared film.

And of course before you take the leap and buy a new lens, you should check to make sure the lens is compatible with your camera. This information can be found on your camera manufacturer’s website.

You should check the mount type. With Nikon, this shouldn’t be a problem. The SLRs have had the same mount since 1959! But while the lens may mount on any Nikon camera, it may not be fully compatible. The type of camera sensor should be also considered. Nikon has DX lenses and FX lenses. DX lenses are for crop sensors, FX are for full frame sensors.

Canon has two different mounts. The EF lens mount and the EF-S lens mount. The type of sensor in the camera will determine the mount lens that can be used. The EF-S lenses were made to used with Canon APS-C sized sensors (crop) and the EF lens is for full frame sensors.

If you are totally and utterly confused, hang in there for the following month as we dig a little deeper into lenses. Next week, Jennifer Bacher will tell us about some popular lenses to buy and why!

Read the whole series: Everything you want to know about camera lenses
Part 1: Understanding the writing on the lens
Part 2: What lens should I buy next?
Part 3: Our Favorite Lenses
Part 4: Lens on crop vs. full frame sensor
Part 5: Comparing different lenses
Part 6: 50mm 1.8 vs 1.4

I am a wife, a mother of 3, and a natural light hobbyist photographer. Photography is my passion, my outlet, and my sanity. My love of photography started like most MWACs, when my 1st child was born. I shoot with a Nikon D700 and a handful of prime lenses. When not learning all I can about photography, I enjoy reading, decorating my home, lake time, mindless television, and laughing with the girls. Website | Instagram

Learn the EXACT techniques that I use everyday to photograph my kids. Stop feeling frustrated with your DSLR. Let me help you with this FREE webclass.