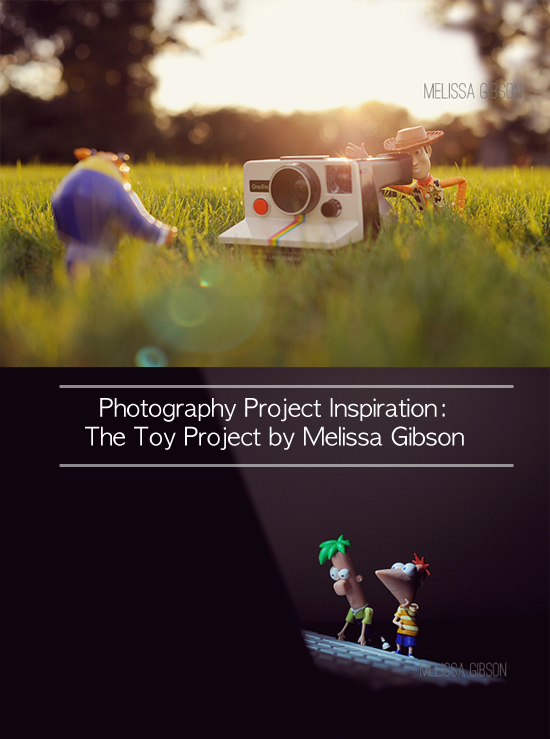 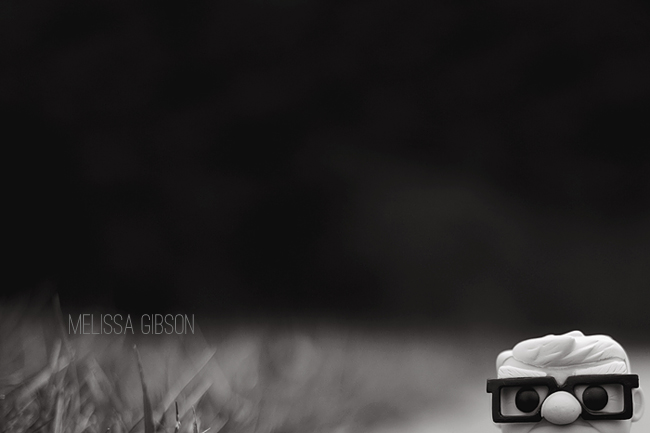 1. What inspired you to start photographing toys?
This whole thing started out rather innocently, really. I mean, I wasn’t planning on starting and continuing. I was just planning on starting and, well, stopping after a month. Honestly, The Toy Project was intended to be a way to fill up a month of my P365 and help me to get out of my little rut. My girls weren’t into being photographed at the time (surprise!) and I needed somewhere else to focus my attention. Once I got started, however, I couldn’t bear to stop! 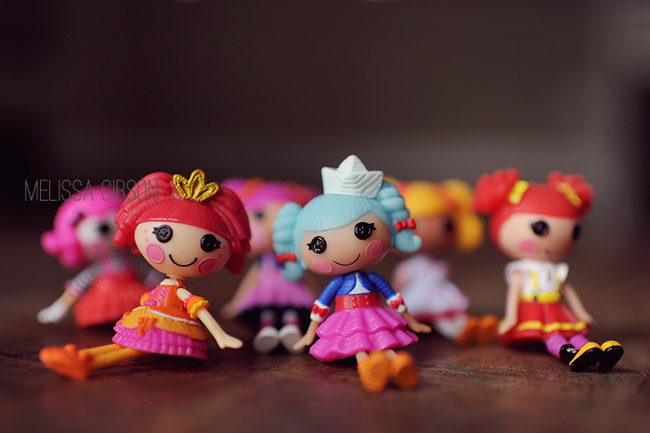 I remember seeing some of their Lalaloopsy mini figures on the floor and being so irritated that I was having to call them in to clean up AGAIN. I stopped and looked around the house only to see other toys scattered here and there. There were dolls on the counter, cars on the couch, a stuffed animal or three on the floor in front of the fridge. It sort of dawned on me that I pretty much live in a playground for toys. 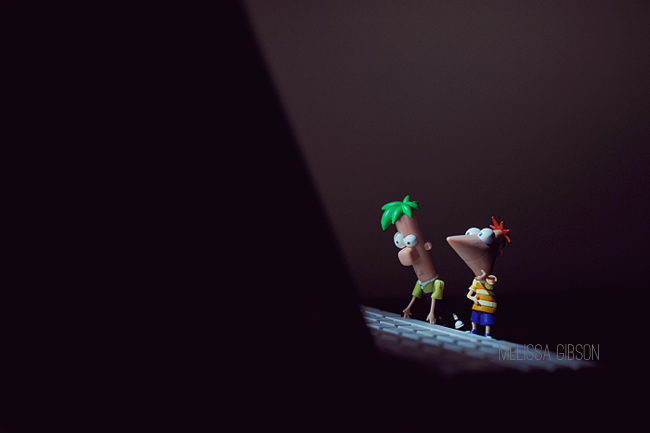 That night, I went to bed and told my husband my idea. I was going to photograph a Lalaloopsy mini figure for 30 days in random spots around town or in our home. I mean, they’re all over the place anyway. Might as well take a picture of them. That idea lasted for 24 hours. One Lalaloopsy session in and I didn’t think I could manage creativity for thirty days with the same toy. I decided that I’d take turns shooting random toys instead. 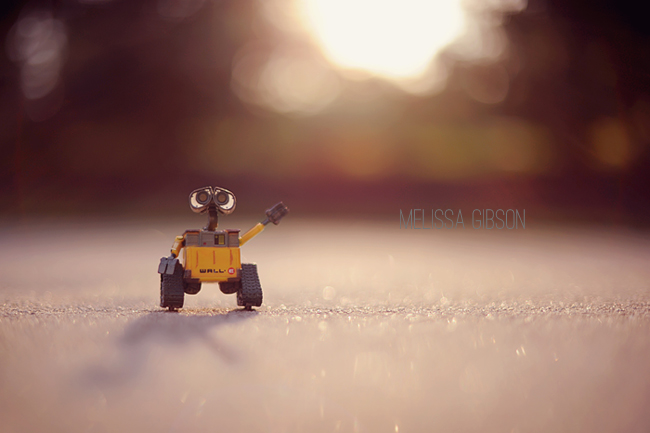 Looking around my home that day, seeing my girls interacting with their favorite toys, stepping on a pile of Legos (again), made me stop in my tracks. It made me really stand back and observe what THEY love and what makes THEM happy. I know that they won’t play with these toys much longer. They will move on to another toy or game or stuffed animal, but I’ll want to remember those days. I know that they will want to remember those days as well. 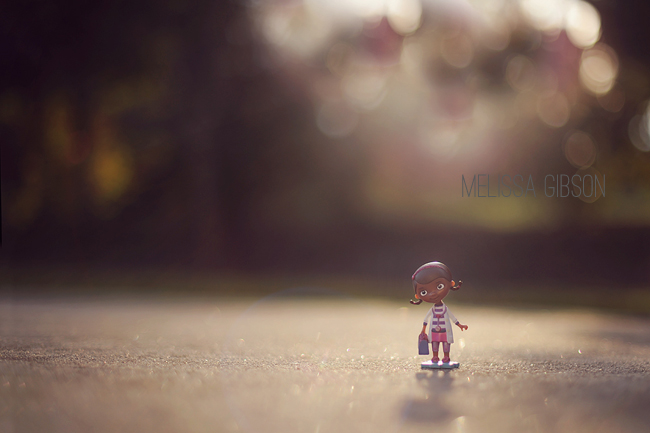 Oh, if I had a pile of photographs of my old toys!! I’d give anything to see those little guys again. I want to preserve this toy love that they have. I want to recognize that toys being scattered about my home is beautiful chaos. It’s a sweet, sweet childhood for them and their toys; therefore, photographing them is a way for us to remember the fun before they move on to another toy love. 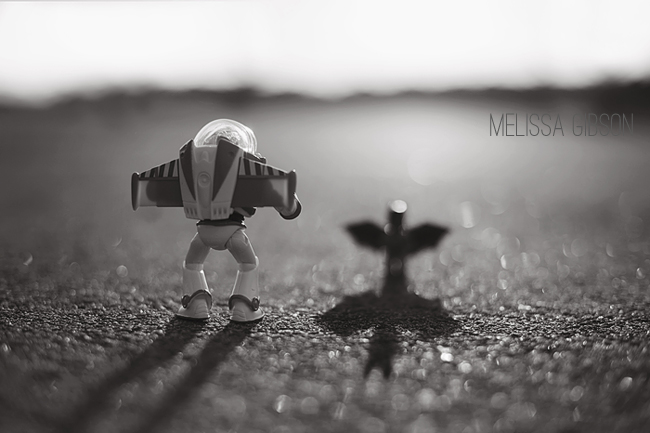 2. Do your kids help you with your project?
The toys that I shoot are mostly toys that they play with every single day, or characters that they love from movies or cartoons. Sometimes they come to me and say that they have an idea for a toy. Mostly, this is my 11 year old daughter. She loves to think up scenes as much as I do. They all really enjoy seeing the toy come to life in the images and get excited when a new idea comes up. Mr. Fredrickson (from UP) came to my daughter on Christmas and she and my 8 year old came up with the idea for him to be walking on the sidewalk and standing in front of the construction equipment. “It’s just like the story in the movie, Mommy. You have to do that!” So? We did. Basically, yes, they do help with the project sometimes and they point out toys online or in stores and beg me to buy it for a “session”. Usually? I say yes. 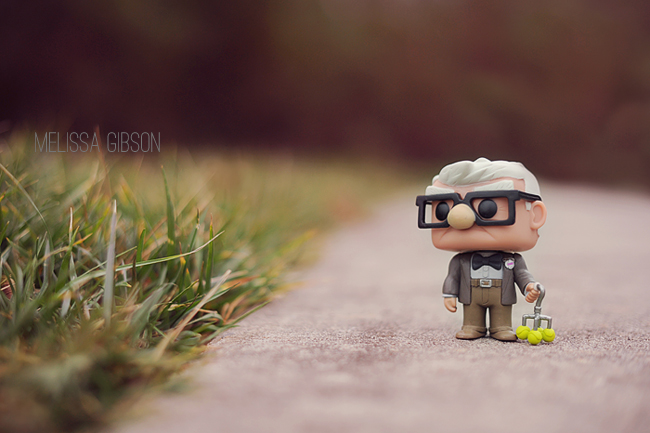 3. The light is beautiful in your images. Do you have a favorite time of day you like to capture these photos?
When I have an idea for a toy shoot, I think of it just as I would a real person. Creepy huh? Whatever light I love for my girls, I love for the toys as well. I try to keep my style the same across the board so I’ll seek out that same type of light and shoot the same way I would a human. That’s usually backlight, hard shadows, or some hazy flare. That said, I usually head outside near sunset for outdoor shooting. As for indoor shots in my home, I tend to just watch the light in different rooms. My middle girl’s room gets great light in the morning, so I’ll sometimes head in there when she’s gone to school and shoot whatever I find in whatever spot it’s in. That’s where the Little Prince was found a few months back. My youngest girl’s room gets beautiful, harder light, in the afternoon. So I’ll set up toys in there as well. The spaceman series and Mike Wazowski were both shot in her room. 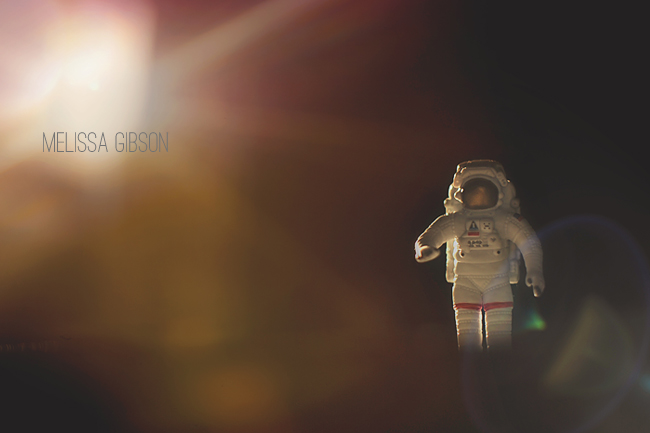 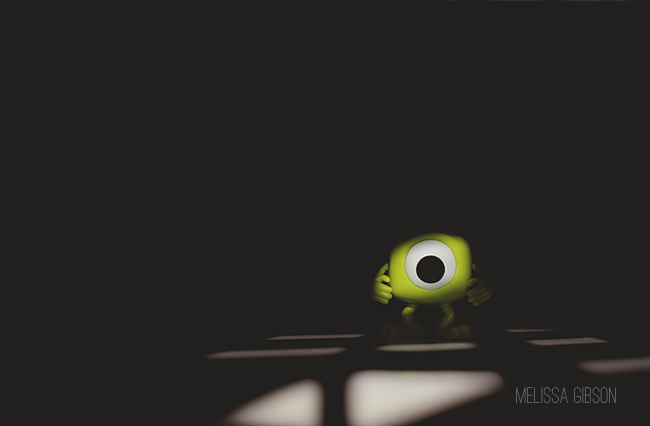 For me, the light is just as important as the toy itself. I spend a lot of time studying the light and treat it as a subject in the frame as well. When I’m shooting toys, I’m able to slow down and really investigate my surroundings. Moving this way and that, seeing what the light does when I’m down low versus being up high, and even using my hand to block some of that light coming in; it’s a huge part of the shot so I spend a good deal of time getting those thoughts together before I even press the shutter. I talk more about the toy project and using the light in the scene in my Breakout that’s in the ClickinMoms store: Don’t miss a thing. 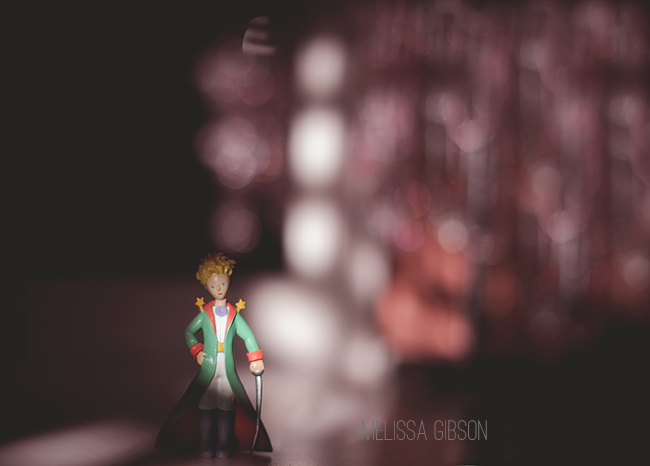 4. What is your thought process when planning the scene?
As I mentioned earlier, I treat the toys as humans. I just imagine them as teeny subjects with lives of their own (see? I told you it’s creepy!). Usually, I’ll see a toy that they’ve been playing with and think to myself, What is this toy’s personality on the show or in the storybook? Is this one strong? Is he scary? Does he TRY to be scary? Funny? Clumsy? 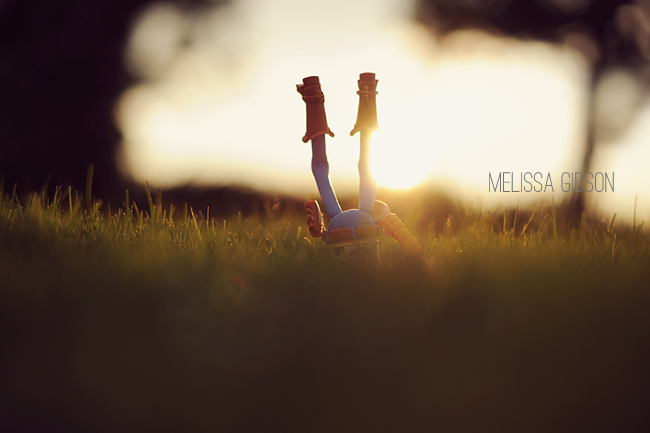 For example, a few weeks ago, I noticed that my middle girl (who loves Legos) had all of her girl Legos together on the building table, but the boy was alone. In my mind I just thought, Now, what would that boy be doing with all of those girls? What sort of storyline goes with ONE boy and a bunch of girls? That quick little thought process led to The Bachelor shot. I actually tried to set the scene up in my girl’s room near the place where I found them; however it just wasn’t working out right and fitting my style so I moved the toys to the driveway at sunset. (I know my neighbors think I’m nuts.) 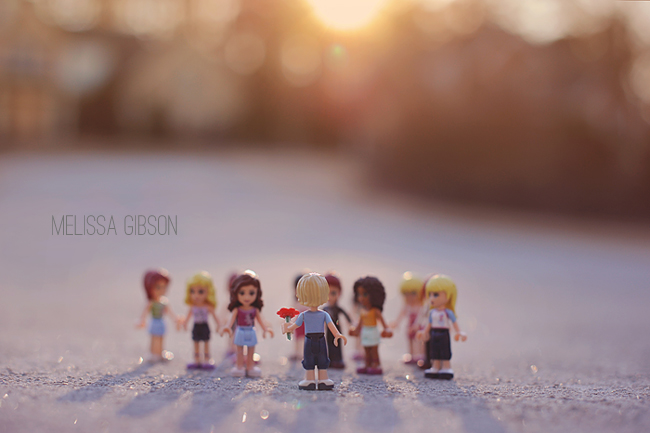 So, sometimes I shoot the toys exactly where I find them and other times I set up the scene somewhere else; just depends on the story I’m trying to tell and whether or not it blends well with the other toys in the series.

Finally, I also try and think of what sort of mischief the toys would be in if the adults weren’t looking. Silly things that they may do or friends they may hang out with when humans aren’t watching. A bit like Toy Story, I guess you could say. 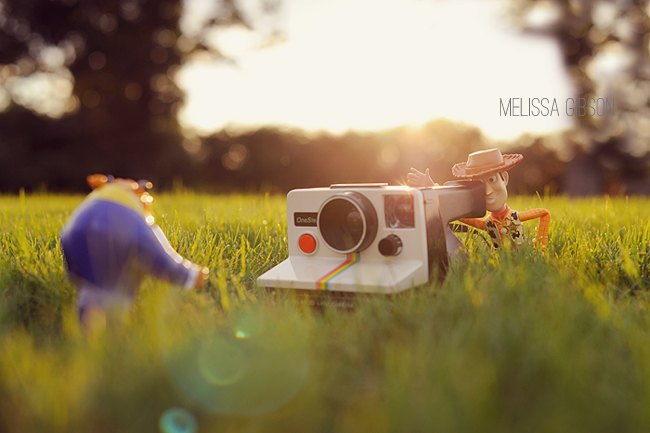 5. What do you plan to do with all the images you create?
My plan for the images is simple really, create a book for each girl to have and probably a quick story or memory to go along with each photograph. Also, I’d love for this project to inspire others to shoot the toys that are in their homes as well. It’s so easy to get frustrated with the mounds and mounds of teeny tiny toys on the floor; however, taking a moment to think of how much the child LOVES that toy may bring new meaning to that mommy or daddy. Stopping to shoot what THEY love in those toys is important to them and I’d love my project to be a reminder of that. A photograph is a reminder to my girls that THIS is important to YOU so it’s also important to ME. I know that my little ones will treasure these images one day (they already get a big kick out of them!) and having them right in their hands as a book is something that’s high on my list. 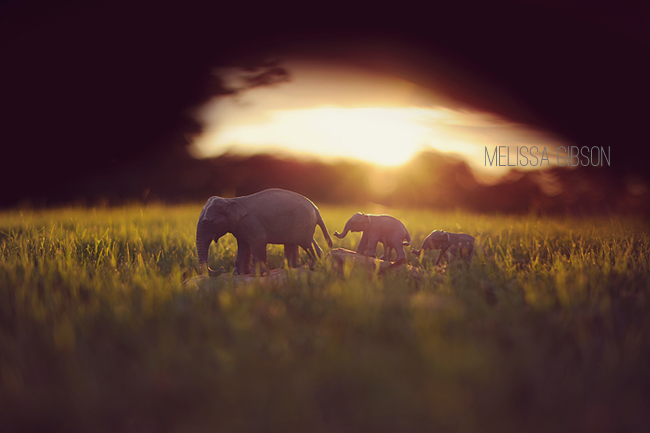 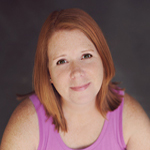 Melissa Gibson – Interview
Melissa is a southern girl living in north Georgia with her husband and three girls. She shoots a Nikon d700 + d3. She loves prime lenses, 50 1.4, 35 1.4 and 105mm. When shooting the toys, she mostly uses the 50mm lens, but will probably be using this new 105 a bit more once the warm weather comes around. (She’s a wimp and thinks 50 degrees is cold. Hey, that’s why she lives in Georgia.) Melissa shoots all images in Jpeg and edits in Photoshop Elements 11. You can catch up on her silly stories and images on her blog here: Melissa Gibson Photography