Home » Manual Mode » How to use Kelvin for White Balance

How to use Kelvin for White Balance
Manual Mode 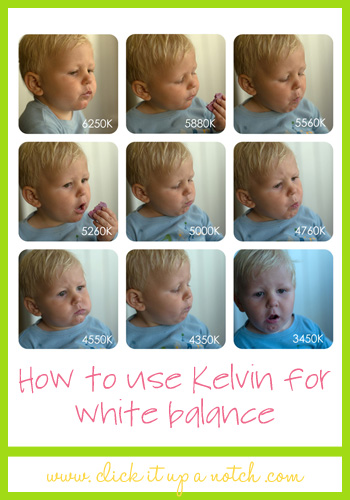 When I began shooting, white balance was the last thing on my mind. But as my technical skills improved, so did my eye for color.  It is really amazing how things seem to come together.

Read more: How to Shoot in Manual Mode

Kelvin? What is Kelvin?

Kelvin is a scale for measuring temperature (as in heat). Color temperatures can also be described in kelvins.  This could get really nerdy, really fast, so I’ll cut to the chase. Basically, the Kelvin scale that photographers use was made by determining the color of a big chunk of metal (black-body radiator) heated at different temperatures. At lower temperatures, it turns red, then orange, then yellow. As it gets hotter and hotter, the metal turns white, then blue. This change in color is what we use as a basis for the color temperature of light in photography.

Disclaimer: This is not an “official” Kelvin chart. I’m not sure there is an “official” one, but this one I made in Photoshop because I didn’t want to rip off anyone else’s hard work. By googling “Kelvin Temperature Chart” or “Kelvin and Photography” you will find more sophisticated charts. This one will suffice as just an example to show that the lower numbers are for more yellow/warmer light, the higher numbers for bluer/cooler light. 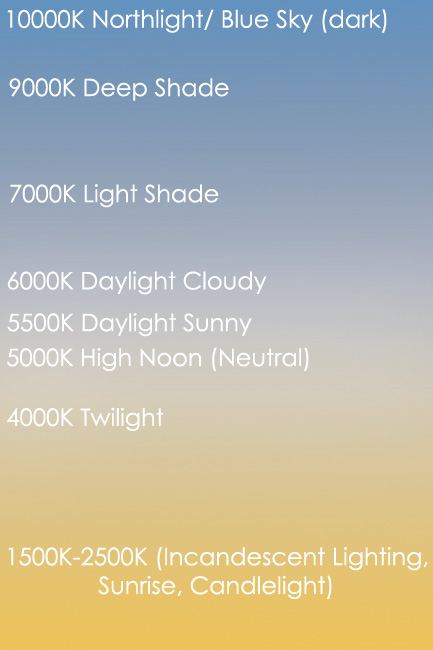 How to Apply Kelvin Temperature to Photography

Basically, when shooting in kelvins for white balance, you should think about what kind of light you are shooting in. Does the light look yellow? or blue? or neutral? Let’s say you are shooting an image in the evening under tungsten lighting. The light will look yellow, and your subject will look jaundiced. If this isn’t the look you are going for, change your settings to around 2800K as a starting off point, and go up or down from there. It should immediately look better, but will likely need some tweaking. If it is still yellow, use a lower temperature, like 2500K. If it looks blue, use a higher temperature, like 3000K. I tend to chimp (check the LCD repeatedly) until the image on the LCD looks as if it were shot in neutral light.

The same goes for natural lighting.  I did a little test similar to this one when I first discovered Kelvin. I have a “magic number” that I use the majority of time in my home. The “magic number” will be different for everyone depending upon the type of light you are getting in your home, and it can also change depending upon the time of day and from which direction the window light is coming from. But if the lighting is consistent in your home, your “magic numbers” will be consistent too!

The following is an example of the different setting used on the same subject. These are SOOC images. No adjustments and everything is zeroed out in ACR, Brightness=0, Contrast=0, Blacks=0 (so don’t judge me!!!) ;) 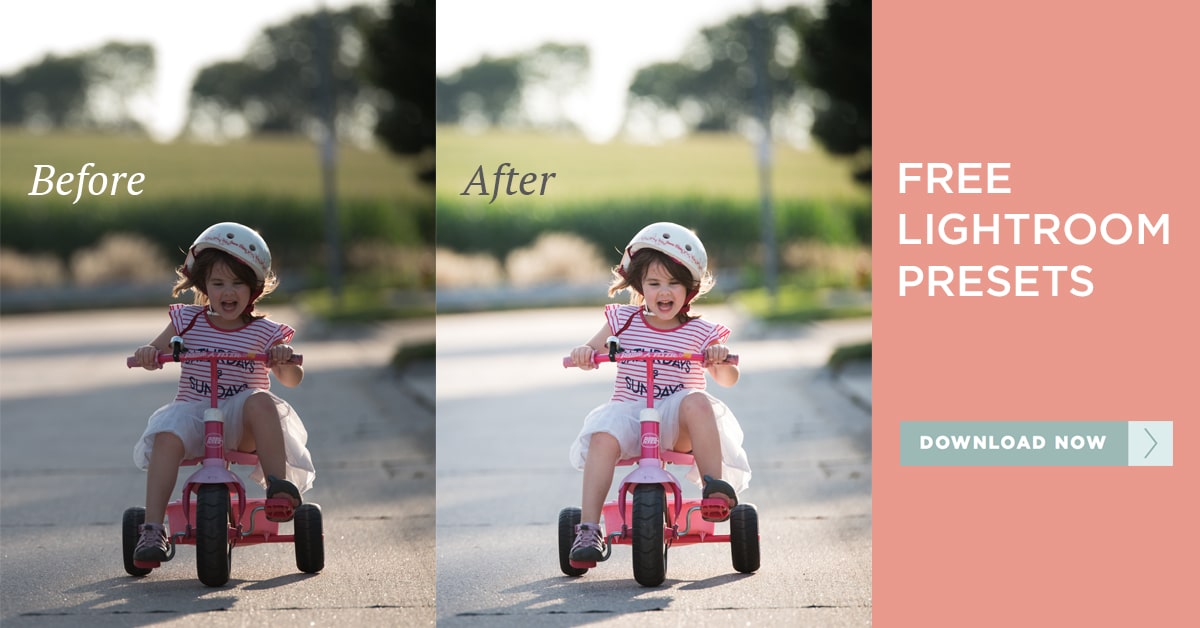 Which temperature do you think looks most accurate? 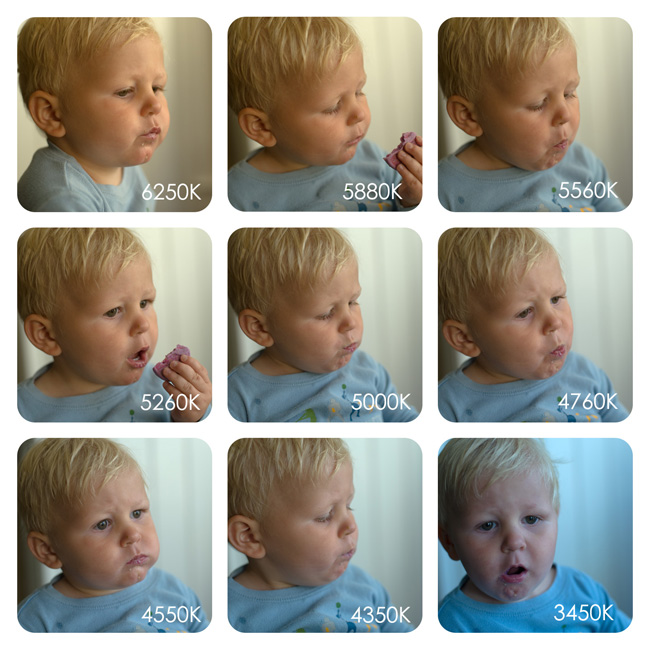 I tend to shoot on the warmer side. Honestly, most of the time, I find my images too yellow, and in this example I would choose 4760K or 4550K as the most accurate. Also, notice how the images looks underexposed in the last photo with the temperature set at 3450K.

You can also use Kelvin to accentuate colors in a sunset. For example, if you changed the color temperature to 2500K, the beautiful yellows and golds will be neutralized and the image will be lacking. If you change the settings to 6500K the sunset will look warmer than neutral. Play with it and see what a difference it can make!

Here, the sun was beginning to set, so a beautiful warm light was illuminating my little girl. I liked the warmness of the light, so I set my white balance around 5260K because I did not want to neutralize it. In ACR the settings read a little differently, which said I had it set at 4800K. 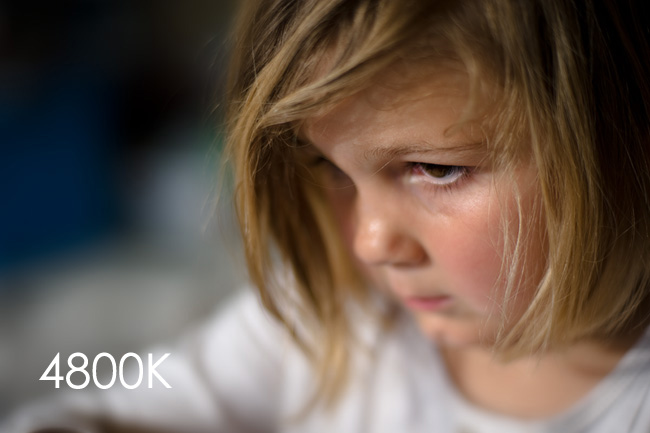 1. Less guesswork in ACR/LR/PS when adjusting WB. While it isn’t the end to color correcting, it gets me much closer to perfect than any other method that I’ve tried.

3. Much quicker than getting out the gray card for changes in location!

Review of Kelvin for white balance:

*Less than 5000K is blue light to dark blue light

*Greater than 5000K is yellow light to orange light 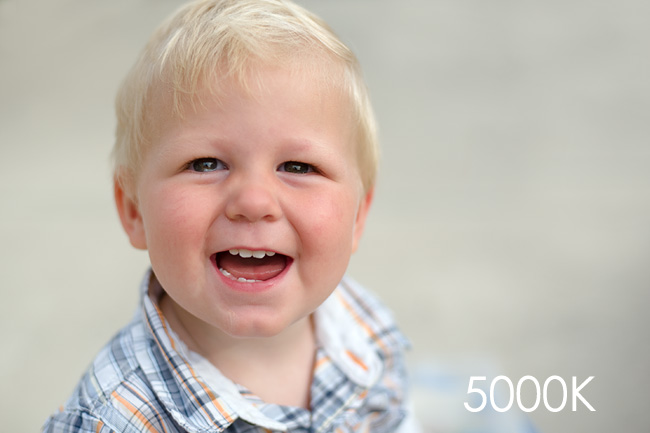 Poor boy is getting over a cold. Never mind the watery eye and crusties :)

Read more: 6 Reasons Why You Have Blurry Photos

Does my camera have Kelvin for white balance?

I’m not sure which models of cameras have Kelvin as an option for white balance, but I know both Nikon and Canon pro models have Kelvin in the menu and the Nikon D80, which I previously owned, did as well. On the D700, it is really easy to change the setting without going into a menu, which makes using Kelvin for white balance way easier than setting a CWB every time you shoot.

– How to find your Unique Photography Style